Beverly was last heard from by a friend who spoke to her on the phone at approximately 10:30pm on April 27.  No one has seen or been in contact with her since.  It’s believed that a nightgown and her purse were missing from her home at 2439 Trace Road, though her other belongings, including her car and her cats, were left behind.  Blood stains were found on the carpet, which led police to suspect foul play.

Beverly was separated from her husband, Jim Ribley, at the time of her disappearance, but they were still legally married.  She lived alone and was dating a man named Roger Adsit, who had reportedly forced his way into her home on a prior occasion, although Beverly was not home at the time.

A neighbor became concerned when she had not seen Beverly, as they were good friends and Beverly would usually tell her if she was going to be away.  This neighbor stated that she had visited Beverly on the day of her disappearance, and that Beverly had done the woman’s hair.  She said Beverly had been in good spirits and nothing seemed amiss.  Beverly worked as a beautician for The May Co. in Spring Valley, and also worked part time at the concession stand at San Diego Stadium.

Beverly was declared legally dead by her husband in 1987, so that he could sell the home they jointly owned.

Beverly was a graduate of Mt. Miguel High School in Spring Valley, California. 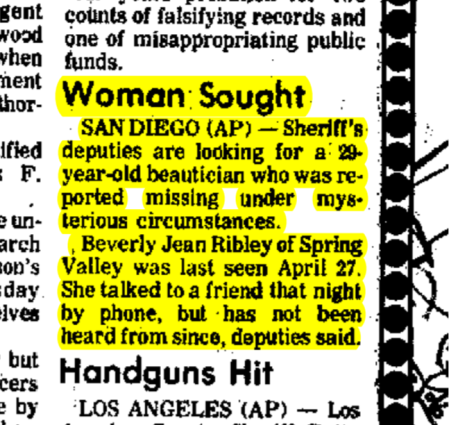