Julie Elizabeth Soracco, age 15, was last seen in Placerville, California some time in 1977 or 1978.

There is little information available regarding Julie’s disappearance, because her half-sister was only about seven years old at the time. Her own memories are vague, and their mother was not willing to discuss Julie, as it was too painful.  Julie’s mother is now deceased.

It’s been stated that Julie had lived in Sacramento, California with her mother and sisters, but went to stay with her grandfather in Placerville.  After awhile, she’d been placed in foster care, and was in the care of the Aldea family when she vanished.   She is believed to have been walking to her grandfather’s home from her foster residence, and never arrived.

Throughout the ensuing decades, Julie was rarely discussed, and while a missing persons report may have been filed at the time, her grandfather had requested no publicity.

There were multiple serial killers in Northern California who have been suggested as possibly being involved with Julie’s disappearance.

Roger Reece Kibbe, aka the I-5 Strangler, was known to troll highways in the greater Sacramento area.  His first known victim, Lou Ellen Burleigh, was abducted and killed in September 1977. Kibbe continued to murder women through the 1980’s; he is currently serving time for the murders of seven women that he confessed to.

The East Area Rapist (Joseph James DeAngelo), who was a Sacramento police officer in 1977, has been suggested as well.

The most referenced serial killer, however, is Michael Anthony Cox.  His known crimes occurred in the 1980’s, but they occurred right there on Main Street in Placerville.  He currently sits on death row.

Julie had left some belongings at her grandfather’s residence, and copies of a couple items found in a wallet of hers were shared in the hope that one of them might trigger a memory.

This was a school ID card, which shows that Julie had attended El Dorado High School. 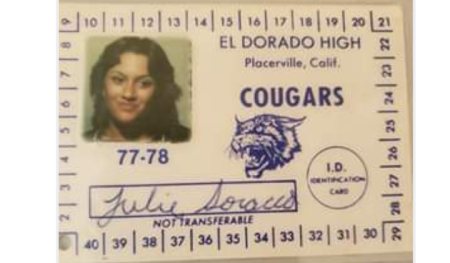 This image was found in the wallet as well, and Julie’s sister hopes to identify this person.

Cases like this are especially difficult, because in addition to not knowing what happened to Julie on that fateful day, her sister is also trying to learn who Julie was, and what she was into.

If anyone remembers Julie Soracco, please get in touch with her sister, Kelly.